Conti 4×4 Trophy winners are FastFit Station customers! FastFit station in Milton Keynes advised Daniel from Milton Keynes to change the worn tyres on his Mercedes to Continental Tyres. This is the same as the original specification when the vehicle was manufactured. Daniel decided to take our advice and purchased four new tyres from FastFit Station. After a cup of fresh coffee, Daniel was back on the road with his four new tyres. With the invoice was some paperwork regarding the Conti 4×4 Trophy. The Conti 4×4 Trophy is a competition that started out as an online rally gaining points for achieving certain criteria. Daniel showed the paperwork to his colleague Steve and subsequently Steve signed the pair up for the competition. 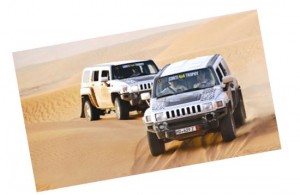 The Conti 4×4 competition was separated into three sections. It started out with the online rally and the thirty two lucky teams who achieved the highest miles on the online rally won a prize to go to Gaydon. Steve and Daniel managed to get through the online rally, in fact Steve said “he really enjoyed the online rally and watching the points changing on the last day was quite nerve-racking!”. Gaydon was a fantastic prize which involved going to the Land Rover testing ground and taking part in eight different competitions across the day. “The day at Gaydon was an amazing experience and we did not think that we would get any further than that. In fact we were extremely grateful for that alone” said Steve. When Peter called their name out at the end of the competition they said they were speechless and thought it was a mistake.

From the moment that Steve and Dan met up with Peter Robb from Continental they were really well looked after. It really was the holiday of a lifetime with no expense spared for the pair. The experience took the teams over just about every terrain on the planet. The Hummers powerful 3.5 litre petrol engine was an incredibly powerful unit. We asked each of the guys what their favorite part of the adventure was and here is what they had to say.

Steve said “This really was the adventure of a lifetime. All of the trip was amazing and Morocco was such an interesting country. I have to say the highlight was the desert. Driving across the sand dunes was an amazing experience. We also camped out in the desert and I got up early and watched the sunrise. That was the most amazing sunrise I have ever seen. You could see the curvature of the earth!”

Dan said “I could not really believe we had won. Even when we were sitting on the plane I just remember thinking is this really happening. We met some great people on our adventure and have stayed in contact ever since. My favourite part was also driving over the sand dunes in the desert. You really just have to go for it or you will get stuck! The scariest moment was when the scorpion came scuttling over to me whilst I was sat enjoying dinner in the middle of the desert. I have to admit I jumped up sharpish, while Steve took the mickey out of me! That said one of the best experiences of my life”

Make sure you enter this year’s competition for a chance to drive the Hummers and win the adventure of a lifetime!